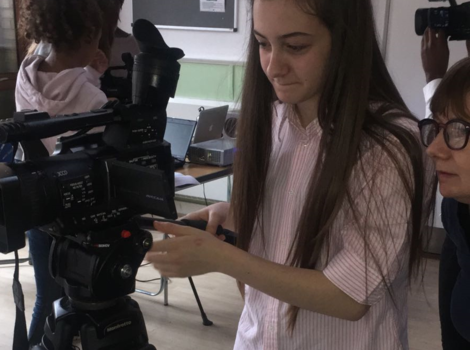 The Octavia Foundation has launched a schools film competition to celebrate the launch of Base@theReed, a new digital media youth club situated in North Kensington.

Students aged 11-18 from schools in the Royal Borough of Kensington and Chelsea, Hammersmith and Fulham, Westminster and Brent are being invited to create a two-minute film based on one of the following themes: ‘My community’ or ‘If I had the power to change the world I would…’

The film maker(s) can work in teams or as individuals and the films can be made on anything from a mobile phone to a camcorder, an iPad to a DSLR. They can also be any genre from comedy, animation or music to video, documentary, action, drama or a news report.

“We’re looking for original and imaginative films that have a positive and inspiring message. The Octavia Foundation Schools Film Competition is a great way for schools to inspire young people to celebrate what they care about whilst encouraging them to communicate clearly, think creatively and find out more about film making.”

The competition will be broken down into two separate age categories: Group 1 – Y7–Y11 and Group 2 – Y12 and Y13. Shortlisted film-makers will be invited to an awards evening at Base@theReed on Wednesday 29th November when the results of the competition will be announced. Prizes include £1,000 for the winning schools and £250 worth of Amazon vouchers for the winning students.

Whether this is a message about what students are up to, a picture from the creative process or even a tip from the young film makers, schools can share their updates with @Octavia_Fdn

Activities in September/October will include:

Drop in sessions - come and try out:

Sessions for youth clubs - bring along a group and try us out, we can create an activity especially for you.

From October we will be offering:

Students should send their finished films to Andrew South, Digital Media Programme Manager, andrew.south@octaviafoundation.org.uk via either a YouTube or Vimeo link or through DropBox/WeTransfer. When uploading the film to YouTube/Vimeo please use the hashtags #OctaviaFoundation #BaseAtTheReed #MyOctaviaFilm